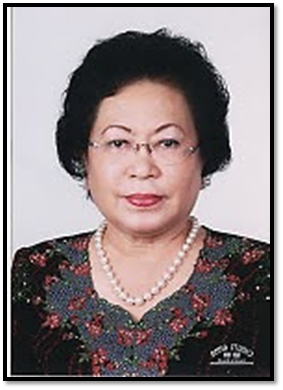 Y.Bhg. Tan Sri Dato Sri Empiang Jabu is the 9th Chairman of Sarakup Indu Dayak Sarawak (SIDS). She was the longest-serving chairman of Sarakup. She passed the baton in 2018 after having served the organization for about 34 years.

Tan Sri Empiang is the first Dayak Iban woman to receive a degree in the field of education. She received her Bachelor’s degree from Victoria University, New Zealand in 1967 and a year later, a diploma in teaching from Epsom Teacher’s College. She was a teacher before progressing into politics, following the footsteps of her famous husband, the former Deputy Chief Minister, Y.Bhg. Datuk Patinggi Tan Sri (Dr.) Alfred Jabu Anak Numpang, whose political career spanned almost a half century. Empiang’s entry into politics began in 1984 when she ascended as PBB Women Chief for Layar Division and in the same year got into the role as PBB Assistant Secretary-General as well as the party’s Women Deputy Chief. She eventually became PBB Women Chief in 2007 and had only relinquished the post after helming it for about 11 years, to give way to younger members of her party.